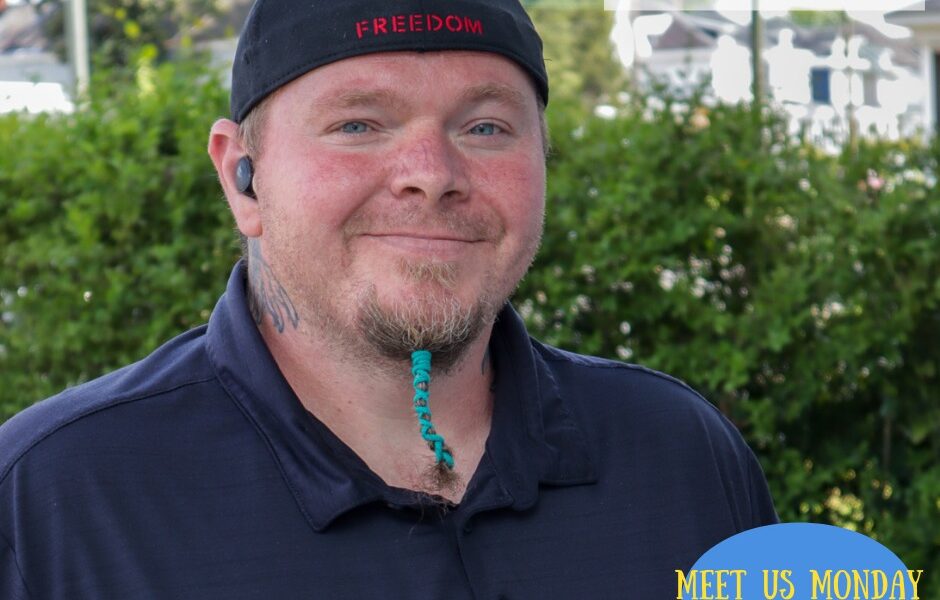 Meet Michael, one of our newest house managers of one of our male houses. Michael is originally from Gloucester, Virginia and spent most of his life in that area prior to coming to REAL LIFE. Michael stated that he had a very normal and loving childhood; he was raised alongside his three sisters and two brothers, with both his parents being present in the home. Michael and his siblings were raised in a low-income household, but besides that factor, he notes that there was not much else out of the ordinary going on.

An unexpected turn took place in Michael’s teen years, however. He began smoking marijuana at the age of 13, got involved with a bad crowd of boys during high school, and ended up participating in a robbery that landed Michael in prison at the young age of 17. Michael served a five-year sentence, but unfortunately his incarceration and substance use did not stop there. By the year 2000, he had begun using harder substances like cocaine, an ultimately found himself back in incarceration that year, this time serving an 11-year and 10-month sentence for a combination of charges, like possession, larceny, and probation violations.

When he was released in 2012, things were going ok, until he found out he was going to need gallbladder surgery. He was prescribed Percocet for the operation, and unfortunately, this situation was the catalyst for Michael’s much heavier substance use. He began using heroin, meth, cocaine, and crack – anything he could get his hands on to fuel his addiction. This time period of substance use was a tumultuous time in Michael’s life, despite things on the outside appearing normal. By 2013 he had a house, cars, and even got married. However, things were not as good as they may appear. Michael divorced and notes that the drug use played a significant role in that relationship.

By 2016, Michael found himself incarcerated again, and served a sentence until 2021. It was this time around where things started to change. Michael knew he was getting older, he knew he was over this lifestyle of drugs and jail sentences, and he wanted a new beginning. When he was approaching release in 2021, his counselor referred him to REAL LIFE. It was this program that gave Michael the structure and support he needed to actually put his plans for change into action and pursue recovery.

Michael credits REAL LIFE for saving his life. Before REAL LIFE, Michael was always used to doing what he wanted, and not having to answer to anyone. Michael says that people are put in this program for a reason, they may just look at this program as a get out of jail card, but that’s not what it is, it’s a new beginning that you have to be ready to take on. Michael wanted to change for 20 years, and he knew he never wanted to go back to prison, and REAL LIFE gave him the resources to create a thriving life. Michael feels that learning to communicate and understand his thoughts, feelings, wants, and needs, is an integral skill that this program has equipped him with.

He says knowing the basics of communication is something many Lifers lack when they first arrive, because it is not something they have ever had to do before, especially younger Lifers. Michael says if you use the help that is given to you, you apply yourself, you will find success in this programming. When asked what he would say to someone considering recovery, he says, “just go for it!” Much has changed for Michael since getting out of jail and joining REAL LIFE.

He has mended relationships with his siblings that were once impacted by his substance use and incarceration.

His brother recently told him he was so proud of him, and Michael notes that this program gives Lifers a lot of credibility when it comes to their recovery journey, because the changes are so noticeable. Unfortunately, one of Michael’s sisters has led a similar path of substance use and incarceration, and Michael hopes that in the future he can be an example and an advocate for her to experience the same success he has from REAL LIFE. Michael says he is still a work in progress, but aren’t we all at the end of the day. He deserves all the praise and recognition for the many positive changes he has made in his life. He is a new house manager, providing guidance and structure to other male Lifers. He found meaningful employment at an Indian restaurant in Richmond, and says he really enjoys working for his boss.

Michael is continuing on a journey of recovery and leads as an example of what life can be like when you put in the work to make the necessary changes. Michael thanks REAL LIFE for saving him, and we are so grateful he came to join our program!