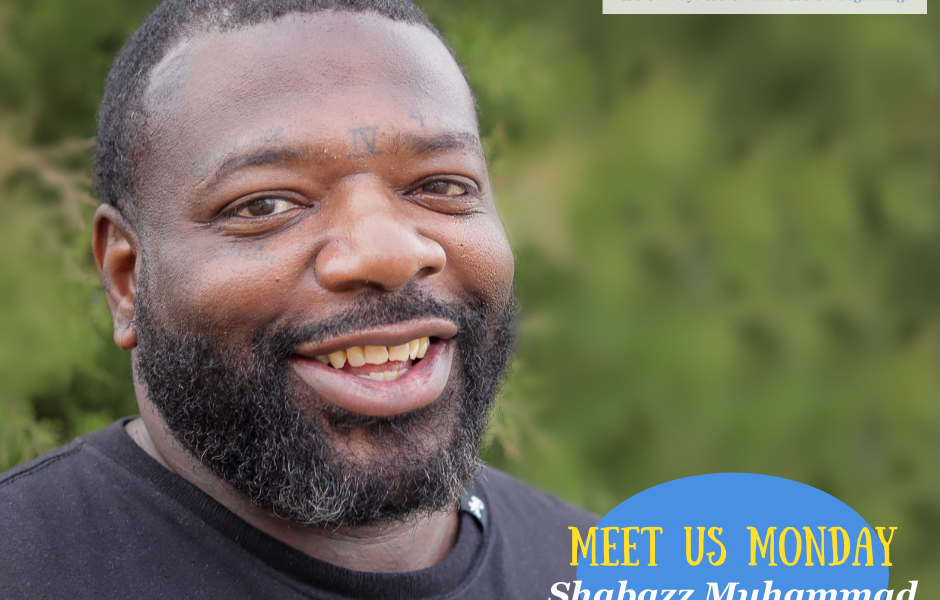 Shabazz grew up on the Southside of Highpoint, North Carolina. He found himself surrounded by an environment where drugs, alcohol, and violence were common. Shabazz had his first experience with crack cocaine at 16.

He ran a liquor house and dealt cocaine, generating money and supply that enabled him to both deal and use comfortably for a time. It was not until he was 20 when he realized how serious his reliance on cocaine was through the loss of suppliers and the need to find new suppliers with less favorable margins. Shabazz was faced with the inability to sell and use as he was accustomed to and as a result turned to robbery and theft.

Starting with his first prison sentence in 1990, Shabazz has been battling through the repeating cycle of recovery, drug use, and incarceration. Shabazz found himself in Virginia following a 3-year sentence in 2004 for assault. He was able to do fairly well for a time after his release thanks to his relationship with his brother – they lived and worked together. In 2014 his brother passed and Shabazz relapsed, resulting in a downward spiral.

It was in the court holding cells for his most recent prison sentence that Shabazz was introduced to REAL LIFE. Shabazz knew inside that he needed REAL LIFE. He needed support to face the rabbit hole that he knew his addiction becomes when he eventually starts using. Shabazz applied for the REAL LIFE program in 2019 and was approved and released to the program on March 12, 2021.

Shabazz says “he has a depth of gratitude for REAL LIFE because he was able to do everything he needed to because of the program.”

Shabazz’s mother passed in May 2021. He was able to go home, see to her burial, take care of her property, and bring together all of his 4 daughters for the first time. But most of all, he was grateful that his mother knew he was in the program and doing well before her passing.

Shabazz feels as though his life is finally in order thanks to REAL LIFE. Shabazz takes to heart the words that his mother told him and others often, “son get your life in order.” He prioritizes planning for life one day at a time and being a productive role model for his children. He is currently working as an individual contractor and hopes to get his CDL in the near future, as he recently obtained his license. Shabazz is also currently a house manager for the Bosher House, a REAL LIFE house.

To Shabazz these last 3 months have been the best of his life. In hindsight, he would offer two pieces of advice. The first being, “If there is ever a time to take advantage of something it is this program. To get productive, to get where you need to be, so when your time is up it isn’t up, but it is instilled in you. See through the smoke and realize that you affect others and you can choose to be a good or bad apple to those around you.”

His last piece of advice being “to really address the root of the problem, be a detective. Name the triggers that lead to you relapsing and take the initiative to control your environment one day at a time to have a productive day.” Shabazz’s encouragement that both he and others can embody a changed lifestyle through REAL LIFE is “if you could do it when you were high you can do it now. You need to use that same drive you had and apply it towards staying clean and being productive.”

Shabazz hopes to show gratitude to REAL LIFE for giving him a head start towards building a stable foundation and support circle by being productive one day at a time.