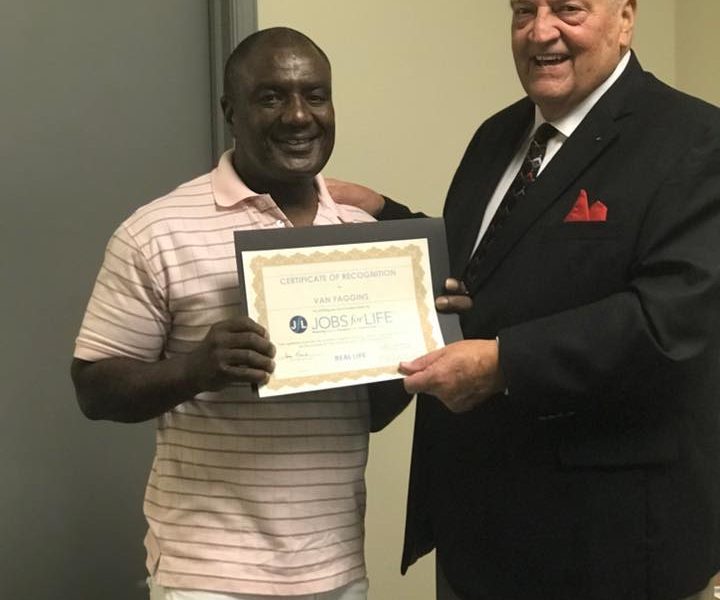 Van shouldn’t be with us today! He has defied all odds! Even defied what the court had in store. But God had a different plan, and so did Van!

Van was born and raised in a good, church-going family—though his father was an alcoholic. During his childhood, he was involved in both Cub Scouts and Boy Scouts. Eventually, he began hanging with the wrong crowd who introduced him to drugs, women, and cars. After graduating high school, Van’s lifestyle escalated which landed him behind bars for the first time in his early 20’s. When he was released a year later, he started selling and smoking cocaine—any profit he made fed his addiction.

On his birthday in 2016, Van was arrested – again. He realized this cycle had been ongoing for 30 years, yet he “kept doing the same thing and expecting different results.” So he did something different by participating in The REAL Program at Richmond City Jail. Once released on bond, he went immediately to the REAL House (which was a condition of bond) and put in the work to transform his life. He had a plan and stuck to it. He worked strongly REAL and the program and the police department doing community walks and talking at the Chief’s town hall meetings. He engage in a lot of community service, maintained a job, received a driver’s license, AND passed ALL his drug tests! Of which… Van has been clean since March 24, 2016! Although he was facing a mandatory minimum, his consistency over 18 months, steady jobs, and passing all drug tests led to the court sentence outside the guidelines!

He has been the house manager at the REAL House for almost two years and has helped countless addicts change the course of their life, just as he did. He was selected through a competitive process to participate in the UnboundRVA Program, an entrepreneur training program, that will allow him to fulfill his dream of starting his own lawn care business in the near future! Van has a strong foundation that he attributes to “the stability from REAL has kept [him] grounded.”

Keep going Van. We are so proud of you and honored to have you part of the team!