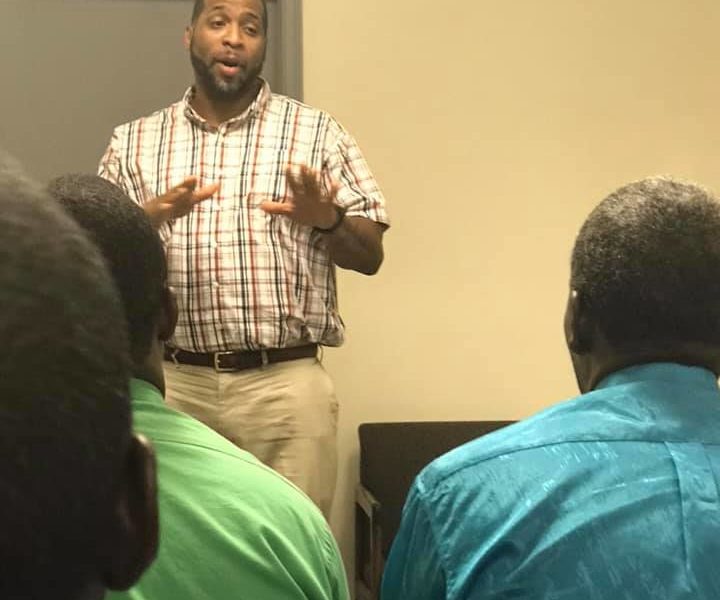 “The first coat is always the hardest.

The second coat isn’t as hard, but you always go back to the details in order to refine it and keep the first one strong.

I recently had the opportunity to interview Leander, a current client at REAL Life. Leander is a very charismatic and open man who was kind enough to tell me his story of taming his inner demons while navigating through numerous trials and tribulations. Although, at times, circumstances seemed to be against Leander… by his own determination, and the “grace of God”, his story is not over yet and has come full circle to a heartwarming and positive present-day lifestyle.

Leander was born in Martinsville, VA on August 16, 1975. He was a small-town, country boy who grew up with his mother, father, and two brothers. He learned how to work with his hands at a very young age, which later created a self-providing man. He was interested in and exceptional at trade-skills such as carpentry, landscaping, and overall house-remodeling; but was also completely comfortable working on an automobile. He knows his way around a diesel engine. These skills as a “fixer” and a “doer” are what ultimately keep Leander afloat in his later years and are also what give him his big second-chance. But we will talk about that later…

Leander’s inner demons festered at a young age. His father and brothers lived the lives of drug addicts, alcoholics, hustlers, and thieves. To paraphrase how Leander put it; it wasn’t a total surprise that he went through some of the things that he went through. He grew up with all of it. He was a product of his environment.

Eventually, Leander’s mother and father separated, and while living with his mother, Leander became rebellious; as she had absolutely no control of him. He started to go out at all hours, skip school, and experiment with alcohol. This type of behavior brought him to be committed to a juvenile detention center (JDC) for the first time, at the age of 15. Leander was originally sentenced to 6-12 months for several criminal charges, including grand larceny. Unfortunately, due to physical altercations that he took part in, he ended up spending a total of 18 months in a JDC.

One free, Leander experimented with marijuana for the first time. He then began to sell weed both in and out of school. Since he had received his GED while committed in the JDC, he had found going to high school to be pointless and ultimately only attended “to sell weed and for the girls”. Eventually, Leander was expelled from his high school.

While still regularly selling and smoking marijuana at a young age, Leander was introduced to cocaine. This is when his “real hustle” began. Selling cocaine made Leander money at a much faster rate than selling marijuana did. He soon began to use the same product that he was selling. He was used to a style of drug-dealing that they called “hand-to-hand combat”. Which ultimately meant that he would be on the street corner, selling drugs, while physically holding most of his “stash” on his person. This made it easy to for law enforcement to catch him, and soon, Leander was the target of a sting-operation. In this case, a sting-operation involved law enforcement officers coordinating with a single confidential informant (CI) in order to purchase cocaine from Leander, while surveilling the interaction in some format.

Leander was indicted on Thanksgiving Day that year, being charged with a felony cocaine distribution charge. Then, 6 months later, he was sentenced to a 6-year incarceration with 3 years suspended. He ended up serving 18 months. This was the first time Leander was sent to an adult penitentiary. By his own account; JDC was “absolutely crazy” with “young guys acting wild and fighting all the time”. The adult prison was “noticeably easier to deal with than JDC”, and although it was still violent at times, Leander now knew “how to move” and navigate living in incarceration. According to Leander, he used his foresight and analytical thinking while in prison to recognize potentially violent interactions with other inmates and would either maneuver around them or confront them head-on. “If I knew that I was going to have to eventually fight somebody, then I would”. Eventually, Leander was moved down to a “lower level” (less intensive supervision) because his charges were non-violent offenses. This is where he spent the rest of his incarceration.

Upon release, Leander was placed on a very intensive probation program. When he got back home, he fell back in with his old friends, many of whom he had grown up with. Leander’s “homies” never left the street life. They took Leander shopping, out to eat, and even went out partying (as well as to a strip club… or two); all while driving expensive cars, frequenting a variety of women, and using narcotics. Although Leander was on intensive probation, it did not take long for him to be back out on the street, “smoking weed, using cocaine, and hustling”. It did not take long for Leander for be incarcerated again, this time on a probation violation.

On the way to his sentencing from pre-trial detention, Leander ran into a man who was the one of the directors of the Passages Treatment Program. Leander explained his situation to the man, and the man asked if Leander wished for him to advocate on his behalf to the judge. Leander agreed, and as the grace of God struck again, he was able to walk out of the courtroom that day, court ordered to enter and complete his first substance-abuse treatment program.

Leander soon met his “lady,” who gave him a lot of things, including a good roof over his head and some love. Although his lady was kind and educated, coming from a completely different background than Leander; he was still living a life of stress. The stress came from child support, court-fees, and other obligations. Although Leander was able to work odd-jobs throughout Richmond, this money wasn’t constant, and it wasn’t nearly enough to relieve the stress. Leander fell back into his old habits of self-medicating with narcotics in an attempt to relieve his stress.

Through 7 prison sentences, approximately 12-15 years lost to “the system”, and many confrontations with his lady; Leander finally to terms with the fact that he has a substance-abuse problem. He went to a local public-health department but was told that they were extremely busy and that they wouldn’t be able to see him for 45 days. Leander was rightfully frustrated. He left the health department and walked across the street…

By the grace of God, Leander walked across the street and right past a man who was speaking on the phone. As he passed, Leander overheard the words “addiction” and “recovery.” This man turned out to be REAL LIFE’s very own Ryan Riggs! After a brief introduction which ended with Ryan giving Leander his contact information, Leander went on his way. After a few months and at least one stint of time spent incarcerated, Leander called Ryan. Leander was tired of feeling lost and at the mercy of his inner-demons. Ryan helped Leander by advocating for him to a judge in regard to some ongoing criminal proceedings that were keeping Leander incarcerated, as well as holding him back from furthering his own recovery. To everyone’s delight, Leander was released on bond, with the condition that he complete the REAL LIFE program. In addition, one of the felony charges that was being held over his head was dropped to a misdemeanor!

Now, Leander has been with REAL Life since May 2019. He has also been living in the REAL LIFE Men’s House, and it is obvious that he is a valued member of the REAL Life community. His case manager is Ryan Riggs, and Leander enjoys working with Ryan because “they both keep it 100 with each other”. Ryan can sniff out mischief and deceit from a mile away, and this allows Leander to be a lot more honest and open. Leander commented that he is still learning every day about new techniques regarding how to deal with stress, anger, and other internalized issues. “It’s a lot easier without the ‘pollutants in the mind’. This is ME now”.

Soon after joining the REAL LIFE community, Leander and Ryan set some goals. One of these goals was to find Leander some consistent employment.

Leander entered the interview process to join a construction class organized by REAL Life and several local sponsors such as Caritas, Allen Myers, and Virginia Commonwealth University. There were 25 candidates for the interview, but only 10 spots in the class.

By the grace of God, Leander was one of the 10 individuals chosen for the class! And not only this, but he was the only member of the REAL LIFE’s Men’s House who was chosen this round!

As Leander commented, he SHOWED UP and SHOWED OUT. His desire to change his lifestyle, learn new skills and techniques, but also, prove that he is more than capable to perform, considering his vast knowledge and past work-experiences. Leander hopes to continue his positive progression, and hopes to one day, broaden his professional horizon.

As the interview ended, I asked Leander how he felt about REAL LIFE and if he had any words of wisdom for any readers who may be going through similar issues or know somebody who is. He replied,

“I had to get to a point where I had to be brave enough to put my life into somebody else’s hands. Circumstances brought me to do this with Ryan, Sarah, and the REAL LIFE staff. I gave up my old ways of thinking and the choices I made and followed the instructions and advice of everybody at REAL Life and look where I am now. You gotta be brave. Enough pain. Stand up and have the courage to seek help so that you can better yourself. I had to stand up, put my old tool bag down, and get a new one. Sometimes the best advice is the stuff that you might not want to hear.”

Staff Note: Leander has been key in the “flip” and renovations on the new REAL Female House. He has put his carpentry skills to excellent use and volunteer hours and days upon days doing everything imaginable – painting, installing a vanity, cutting holes in walls, cement work, laying flooring, fixing toilets, wood work, and more! He is one of the hardest workers REAL LIFE has had and does it all with a smile and without one complaint!