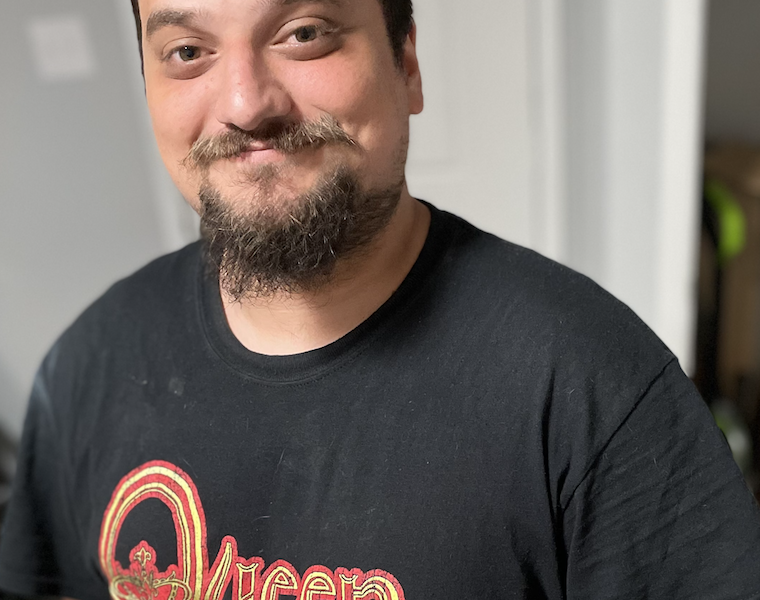 Christian had always been uncertain about his future. From an early age, he struggled with self-assurance. This caused him to prioritize making poor decisions surrounding his friends and environment. Later, he joined the military, where without his friends and family, led him into a dark depression. To try and combat his depression, Christian resorted to alcohol which led to his alcoholism. “I would drink half a gallon of alcohol a night, not to mention the beer I’d drink, that was just the liquor.”

With Christian’s alcoholism, his decisions became self-destructive, landing him in jail and prison. Once post-incarceration, one of Christian’s main concerns was being homeless. “I had no idea where I was gonna go.” However, when given a pamphlet of rehabilitation centers, REAL LIFE stuck out. Upon deciding to try at REAL LIFE, Christian had his meeting with Dr. Sarah Scarbrough where they discussed what his future at REAL LIFE would look like. Immediately, Christian was both moved and scared. Moved, because he was surprised that the head of the program would take time out of her day to speak to him and scared because of what the program was requiring of him.

His fear culminated on his first day at one of the REAL LIFE houses where he was scared he wouldn’t be able to keep up. It was there that his roommate, now one of his best friends, assured him that “he would be okay.” Along with making friends with his roommate, Christian discovered a whole new host of people who he plans to keep as “lifelong people.” “The program is filled with people who all want to see you succeed and having that support, it’s everything.” Specifically, Mr. Young, his REAL LIFE pathway navigator, helped Christian combat his instinct to give up.

When asked if there was a time in the program where Christian thought he was going to fail, he responded yes. “I texted Mr. Young saying I couldn’t do this and that I wasn’t right for the program and the next day he came to the house. He sat me down and told me ‘no more excuses and you have to fix your life.’ It was a pep talk of sorts. I was prone to giving up on myself, so to have someone there…, I think about it a lot.”

Christian credits both the REAL LIFE environment and the REAL LIFE staff to his continuing attitude shift and lifestyle transformation. “I’m at a point I never thought I’d be at.” With real medication, therapy, house meetings, and the constant supportive environment, Christian has started and will continue to work on himself, “I’ve started to care about myself whereas before, when alcohol ruled my life, I didn’t care about who or what I hurt.”

Now thanks to REAL LIFE, the future that once seemed uncertain and unattainable, looks plausible to Christian. “I thought I would die miserable and alone, but now I can see maybe getting a house, having some kids.” Christian, now, has officially graduated from the REAL LIFE program. When learning that he’d fulfilled the requirements for graduation after six months, Christian experienced a maelstrom of emotions: shock, pride, fear, and happiness. Christian will be moving on and spreading his wings starting July 1st where he’ll be opening up his first apartment with his wife. There is also talk at his job about being promoted to a management position.

Christian’s advice to anyone considering joining REAL LIFE but is uncertain is “to stop being scared.” “Yeah it’s going to be hard, but if you really care and really try, you can really start to transform your life; there’s no other program like it.”