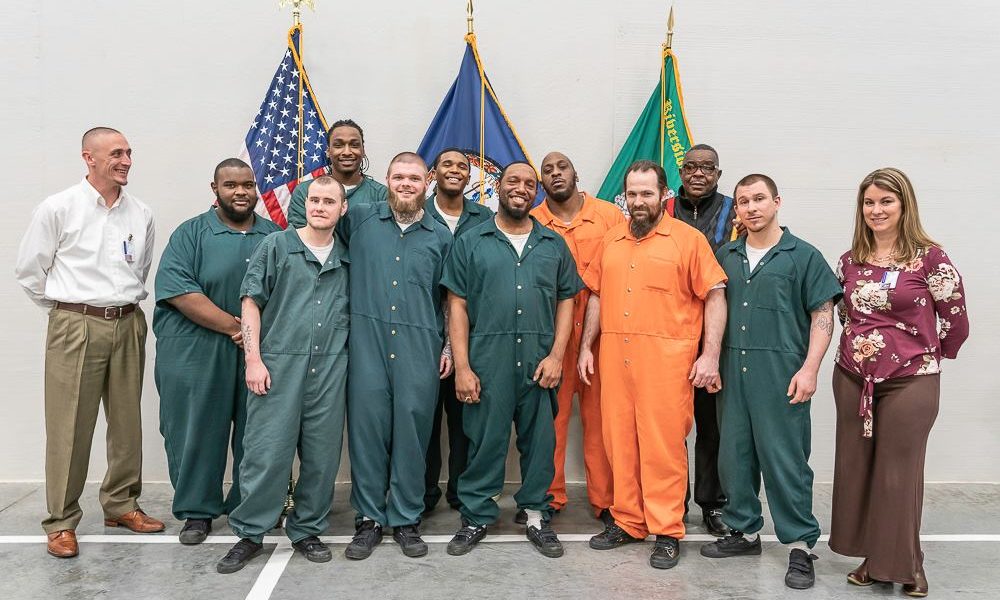 He shared his experience transitioning from outside criminal justice work in policing to inside a correctional facility— “the definition of the revolving door.” He never had to see the people he had locked up when he was an officer on the street. But then, after elected Sheriff, “saw the other side.” In an effort to reverse the cycle and give people a “chance at life,” The REAL Program started in the Richmond Jail and evolved into the REAL LIFE Program, a non-profit organization in the Community, founded and directed by Dr. Scarbrough.

Former REAL Program staffer, Ervin Hart, is now leading REAL LIFE’s Opioid Program at Riverside. Hart led the group of graduates through the REAL LIFE Opioid Program utilizing the Narcotics Anonymous 12-step program and behavior modification model. For graduation, each graduate prepared a reflection of their experience in the program. The collective focus was hope and gratitude, while sharing personal epiphanies and feats.

For Sanchez, a graduate, his epiphany was realizing that “100% of the choices I made, good and bad, were my choices and my responsibility. Making excuses and blaming others for the trials and tribulations I’ve been through are no longer an option for me in recovery.”

Any discussion of difficulties were quickly paired with positivity. Willis recognized the impact of the program “by planting a seed of hope and courage to help us overcome the hardships in our lives.”

Adams noted that the journey doesn’t end here, nor will it be easy, “in fact, the road to recovery will be treacherous, long, and full of shortcomings. However, with the tools I have received from this program, 12 steps, and encouragement from my fellow peers, I can stand fast and strong in my battle with addiction.”

Gibson felt that “being in this program has given me a light at the end of the tunnel,” and appreciated the opportunity to be his authentic self. Other participants had similar feelings. Thomas learned the value of “being honest with myself and others,” and also taught him to “be open-minded and willing to listen to others.”

The program instilled the benefit of reestablishing support systems, even on a personal level. Desmore said that “you can’t give up on yourself or beat yourself up over things that you can’t change,” and Davis realized that “I can not do this recovery thing alone and I do not have to.”

The group became a safe place for growth, hope, spirituality, and support. Participants were encouraged to look within themselves, keep an open-mind, discover their desire for change and finding the courage to do so.

Carter credited Hart saying that he “changed my way of thinking about life, showed me how to more responsible, and showed me that I’m not as bad as I thought I was, nor what others thought of me.”

Ervin Hart did more than just facilitate the program. Braswell highlighted Hart’s dedication, three times a week, for three months. Braswell was also appreciative of Dr. Scarbrough “for making all of this a reality and heading the program to promote change.”

Each graduate expressed their thanks. Cochran simplified it by saying, “I would like to thank everyone for giving me the chance to work on myself.”

REAL LIFE would like to congratulate all the graduates in their accomplishments. You all demonstrated awareness, persistence, gratitude, and courage—may your story be heard and inspire others! And special thanks to Ervin Hart, C.T. Woody, and all others who support and further initiatives to improve the lives of others! Last, we want to thank Riverside for the dedication they have to providing quality and comprehensive programs for individuals in their custody! Not every facility is so amenable to such programs, but they see it has a priority and support it wholeheartedly, and for that, we (and the inmates) are extremely grateful.