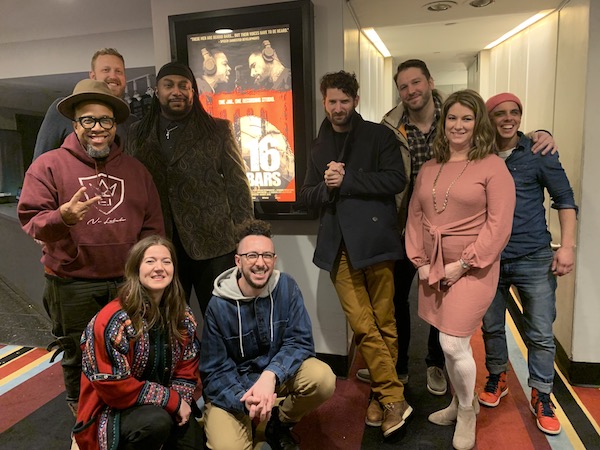 16 Bars in Theaters in NYC – Recap

Less than 1% of documentaries make it to theaters. 16 Bars, filmed in Richmond within the community and in the jail, is part of the ‘less than 1%’ that has hit theaters! This past weekend, it had its theatrical debut in NYC, and this week, it will premier in theater in Richmond and LA! That will be followed by theatrical premiers in DC, Maryland, Pennsylvania and others! REAL LIFE’s Director, Dr. Sarah Scarbrough, had the most incredible opportunity to attend the release in NYC, which also was attended by the film’s entire production team and Grammy-award winning artist, Speech Thomas, of the hip-hop crew, Arrested Development (more on him later)!

The fact that the United States incarcerates more per capita than anywhere else in the world is daunting. The opioid and drug epidemic is staggering. Recidivism rates are high. Discussion on gun violence continues to soar. But meanwhile, an RVA film that really digs into these issues, is being shown on the big screen! This is an incredible opportunity for the narrative to be changed, awareness to be spread, and something REAL to be done.

16 Bars highlights the humanity and struggles of 4 inmates in particular, while they participate in the REAL Program in the jail and REAL LIFE in the community. These 4 men have an even more unique opportunity shown in the film, however: to use a recording studio in the jail and make music with Speech Thomas. The music they made, not only is featured in the film, but also is now a full-length album that Speech produced and released worldwide on November 8 (the same date it was released in theaters in New York)!

The weekend in NYC was incredible. Although I have seen the film probably 25 times (maybe more), sitting in a theatre, in New York City, watching it with folks who had never heard of our jail or program was surreal. Many folks in attendance had never interacted with the jail system, and probably had biased views on those behind bars and who battle substance use disorder. But, nonetheless, they came, watched, and were moved.

To have every single person who worked on the movie there, was incredible. The amazing crew from Resonant Pictures out of New York who filmed and produced were present (Sam, Adam, Alex, Chloe, Sammy), as was the film’s the editor, Al. Joining from the West Coast was our distributor, publicist, and many others working on that end (Steve, Shari, Arnie, Linda). To have Speech, and his awesome wife, Yolanda, in attendance, reveals (continually) just how passionate he is and how hard he is working to promote and bring attention to these issues. It surely has been a team effort, but it’s an incredible team who enabled 16 Bars get to this point!

To top it off, we had an awesome radio personality and movie critic Mike Sargant moderate the discussions after the film. And, we had the privilege to have a formerly incarcerated person who now works for NYU, Terrance, join the discussion.

To see this many people coming together, is nothing short of awesome! And to think, it is all to better understand, and support, a population that is underrepresented and marginalized. And, it’s a group from Richmond, VA – not LA or New York – not San Francisco or Miami, where the focus usually is. Why? Because we were doing something awesome in Richmond. Really, it’s all because a Sheriff, C.T. Woody, Jr. ran a jail understanding the importance of programming and rehabilitative efforts and allowed the most innovative and “out of the box” programming to occur! And, he was willing to open his doors (and the bars) to allow such filming to occur. This transparency behind bars is not often seen. During both nights, we had great audience interaction during the Q&A session after the film, and we were bombarded with a line of folks from the audience with positive comments and feedback. One man shared, “Speech and the director gave a voice to the voiceless in the documentary. You took your privilege out of it and let them speak for themselves.” Boy, that is sure the truth.

Beyond this, what was even more striking to me was sitting in the audience, with all of this going on, and I couldn’t help but think – this is NOT JUST A MOVIE! THESE ARE REAL PEOPLE!!!!! The message could easily get lost in this sort of thing. It’s such a great flick, so entertaining, and just amazing all around – you could forget this is REAL LIFE, literally! But while we were all enjoying ourselves, eating popcorn and drinking a soda, these men are still behind bars and their families are still experiencing the pain of it! And, 16 Bars only showed snippets of 4 people behind bars – 4 out of the millions incarcerated in our country! And this cannot be lost!

It cannot be forgotten that this is a huge issue in our country. That folks behind bars are humans. They are moms, dads, brothers, uncles, aunts, sisters, and friends. Most are really truly good people who made a terrible decision(s). They often want to get out of their situation, they just do not know how. (And that is what REAL LIFE does…show them how to live outside of these situations)!

Incarceration, drugs, guns, overdoses – they all go hand in hand! There is most often a direct correlation. We are making progress, but there is much to be done!

So how can you support? Here a few easy ways: